The working principle of the XPS is based on the extraction of electrons from a sample surface irradiated by X-ray photons.
X-rays are produced when an electron beam with enough energy to promote transitions between atomic core levels impacts an anode. The produced X-rays are redirected to a monochromator, where radiation with an energy of 1486.6 eV is selected. These X-ray photons are guided onto a sample. The interaction of the X-ray beam with the sample atoms results in excitation and extraction of electrons. Extracted electrons are collected in a detector, where their kinetic energy is measured.

By knowing the energy of the incoming X-rays (hν), the required binding energy (BE) of the electron (Ebin) within the atom can be determined. 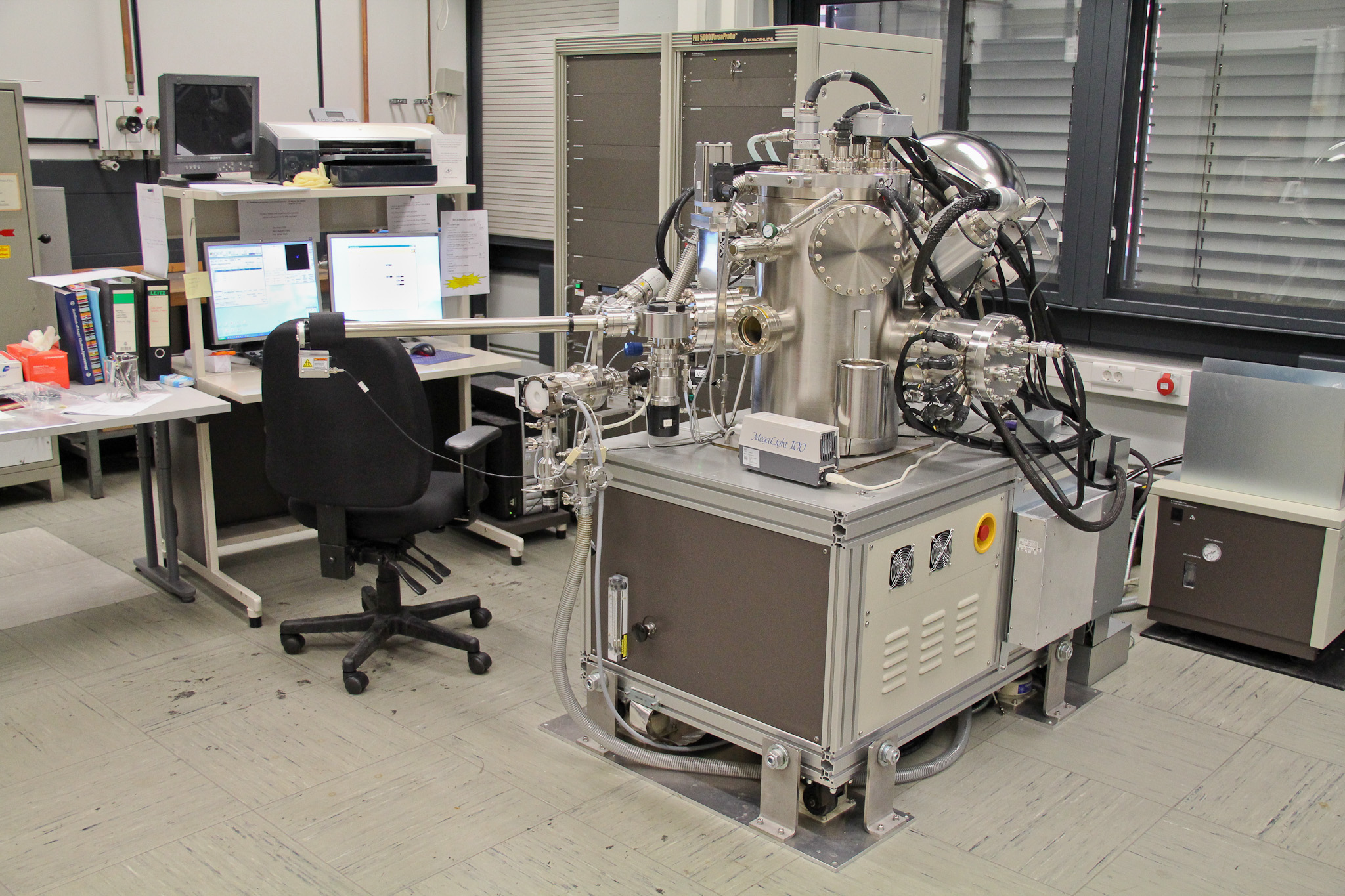 Each element is characterised by the binding energies of electrons in the di erent atomic core levels. The only elements which are not detectable within the XPS are hydrogen and helium. Chemical bonding between atoms leads to a shift in binding energy position, which allows a chemical analysis of the measured samples. This technique is called ESCA (Electron Spectroscopy for Chemical Analysis).

X-ray Photoelectron Spectroscopy is performed using a Versaprobe spectrometer from Physical Electronics (PHI 5000 VersaProbe). At an aluminium anode, Al K α radiation with an energy of hν = 1486.6 eV is produced. A resolution of 0.5 eV is achieved for survey spectra using a pass energy of 187.85 eV. A spectral resolution of 0.05 eV for a pass energy of 23.5 eV is usually applied for measurements of single peaks. Best resolution achieved is 0.025 eV. The measurement spot can be applied to diameters of 20 μm, 100 μm or 200 μm. Standard measurements are performed at a tilt angle of 45° between the sample and the detector. For angle resolved measurements, angles between 15° and 85° can be used. An ion gun with an argon surce is adapted so that a sputtering of the samples with energies between
20 V and 4 kV can be used. 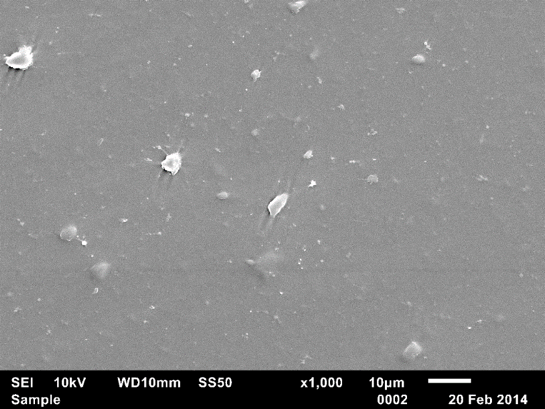 The JEOL JSM-6510 is a Scanning Electron Microscope (SEM). It achieves visualization of a sample by irradiating a focused beam of electrons producing secondary electrons at the surface. Collecting the secondary electrons by means of a detector results in an image of the topography. This enables scanning of a sample with a magnification of up to x300.000 with a resolution of 3 nm using a 30 kV electron beam. The accelerating voltage can be varied between 0.5 and 30 kV. 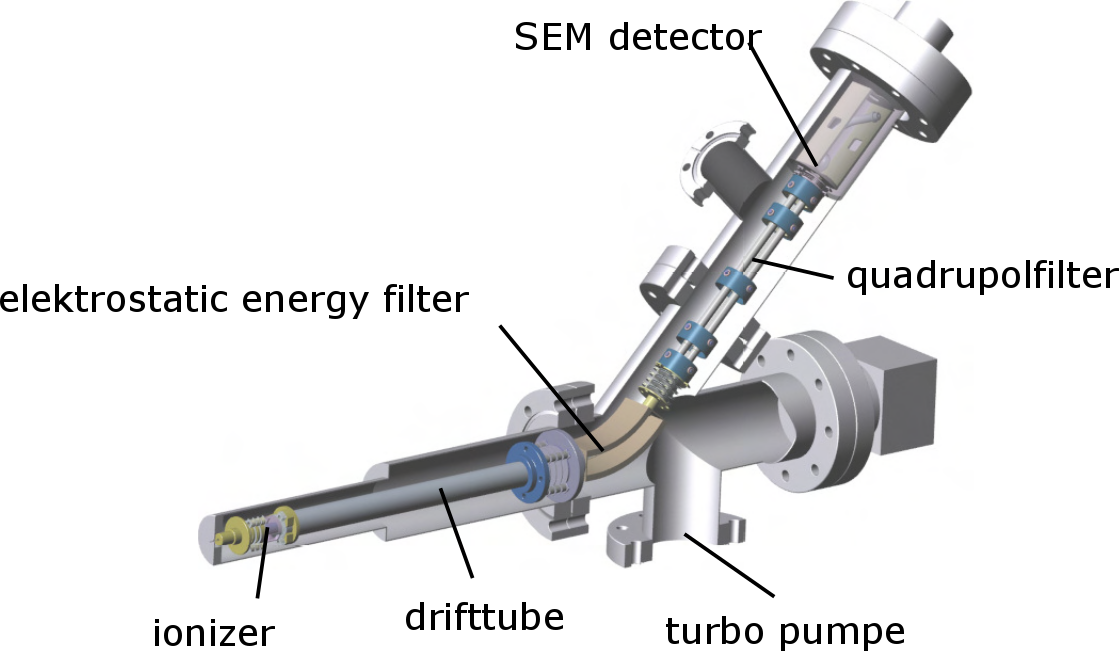 The mass spectrometer has a quadrupol filter which allows the detection of ion masses up to 300 atomic mass units (amu) with a precision of 0.01 amu. In its standard variation the energy filter, consisting of two parallel plates with a voltage apllied to, is capable of measuring the energy of ions in a range of -100 eV up to 100 eV in steps of 0.01 eV. The addition of the high energy component (HE) allows for measurements of ion energies from -1000 eV up to 1000 eV. An ionisator can be used for the detection of neutral particles.

A secondary electron multiplier is used as a detector to count ion rates. Attached to the analogue output of the detector is a transient recorder which is capable of counting events with a temporal resolution of 100 ns. 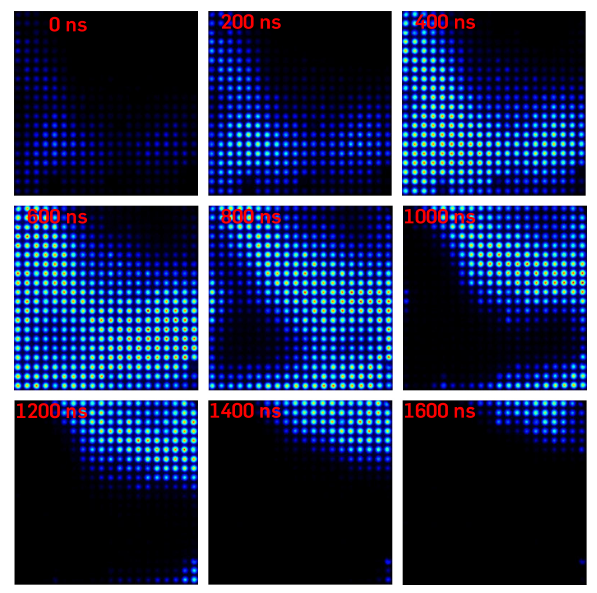 Phase resolved optical emission spectroscopy (PROES) is a technique that alows the investigation of the discharge emission according to the time, especially, phase of the applied excitation voltage. In addition, the combination of an ICCD-Chip and optical filter establishes the spatial resolution of the emission of a selected in wavelenghts.

Here, the camera (LaVison PicoStar HR16) works with a time resolution of about 100 ps. The ICCD-Chip has 512x512 pixels and enables a spatial resolution of few µm. The camera can detect emission in range between 350 nm and 750 nm. 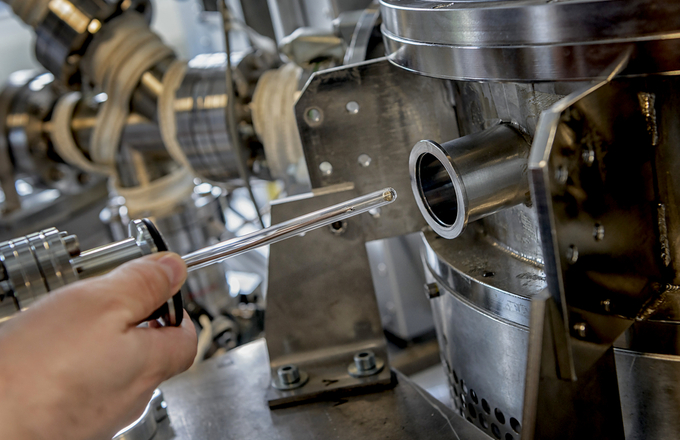 The head of the Multipole Resonance Probe (MRP) con­sists of two metallic hemispheres working as electrodes of a small an­ten­na and separated by a dielectric layer. The head’s diameter is 6 mm and is en­clo­sed by a dielec­tric tube (thickness of 1 mm) which is im­mer­sed in the plas­ma. This makes the probe insensitive against ceramic coatings which is needed in many applications. A self-developed electronic or, as an alternative, a net­work ana­ly­zer feeds an rf si­gnal sweep to the an­ten­na and dis­plays the fre­quen­cy de­pen­dence of the power ab­sorp­ti­on. This method is known as active plasma resonance spectroscopy (APRS). From the ab­sorp­ti­on spec­trum the value of the elec­tron den­si­ty is cal­cu­la­ted. In comparison to other APRS probes, the MRP shows a geometrical and electrical symmetry which significantly decreases the complexity of the model. The measurement range of the electron density is between 1013 m-3 and >1018 m-3. Time resolution lies in the range of sub ms, depending on the used electronic.

The measurement range of the electron density is between 1014 m-3 and 1018 m-3. Time resolution lies in the range of sub ms.